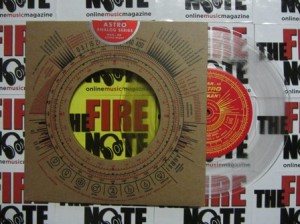 Man or Astro-Man? return with their first new material in well over twelve years with this debut 7-inch in their Analog Series. The series of singles will result with a full length release sometime this year. If you were ever a fan of this band this new music is a must as it finds the group in top form.
Analog Series Vol. 1 brings all of the bands history to the 7-inch format as the A-side gives you a propulsive space surf recording titled “Defcon 5” that sounds like the band never went away. The flip side offers the rocket vocal driven “Anti-Matter Man” that reminds you that the band is not all surf muscle. Both of these tracks should show up in some form on the new full length as the final track “Dr. Space” is exclusive to this release. This last song showcases the fun side of Man Or Astro-man? as it has a very mystery polka vibe to it and keeps things fresh.
The 7-inch is packaged in a custom chipboard, die-cut cover with an acetate window and sealed with a foil sticker. It was recorded by Steve Albini at Electrical Audio, cut direct to lacquer at Chicago Mastering Service and its stylistic artwork is by Aaron Draplin The clear wax was limited to 200 copies and is no longer available. There also was an orange color version that is now out of print as well but the record has now been repressed on red vinyl. Of course for traditionalist there is also a black version available.
Man Or Astro-man? Website
Man Or Astro-man? Facebook
Chunklet Industries
-Feature by Christopher Anthony

The Evens: The Odds [Album Review]