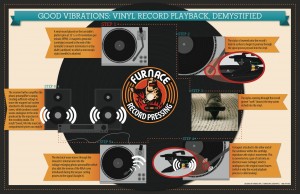 Do you want to get into vinyl but afraid of the technology? Do you love vinyl but have no idea how it works? Well thanks to the fine folks at Furnace Record Pressing you can now download a nice printable copy of their Vinyl Record Playback: Demystified infographic poster right HERE and find the tech details below.
VINYL PLAYBACK, DEMYSTIFIED
(1) A vinyl record placed on the turntable’s platter spins at 33 1/3 or 45 revolutions per minute (RPM). A magnetic generator (cartridge) secured to the end of the turntable’s tonearm terminates in a tiny shaft (cantilever) to which a microscopic stylus (needle) is attached.
(2) The stylus is lowered onto the record’s lead-in surface to begin its journey through the spiral groove pressed into the vinyl.
(3) The stylus coursing through the record groove “surfs” (traces) the tiny waves etched into the vinyl.
(4) A magnet attached to the other end of the cantilever within the cartridge reproduces the stylus’s movement. This is converted via a pair of coils into an electrical wave (voltage) which is analogous to the original sound waves (which is why the record playback process is called analog).
(5) The electrical wave moves through the tonearm’s internal wire into the voltage-enlarging phono preamplifier which also adds the inverse of the RIAA curve introduced during the lacquer cutting process to the signal (Google it).
(6) The receiver further amplifies the phono preamplifier’s output, creating sufficient voltage to move the magnet/coil system attached to the loudspeaker cones, which produces sound waves analogous to the ones produced by the musicians in the recording studio. The result? Sweet, life-like music no computerized system can match!