The Breeders Last Splash Turns 20 next year; Band will reunite to tour 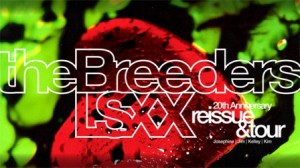 Kim Deal, Kelley Deal, Josephine Wiggs, and Jim Macpherson played their first show together on Friday June 19, 1992, in a snooker hall behind Warrington Rugby Club in the north of England, near Manchester. Two days later they supported Nirvana in Dublin and Belfast, and then played at Glastonbury. Back in the US, after playing 27 sold-out shows that fall, they made their way to San Francisco to record Last Splash.
Released August 30, 1993, reviewers described Last Splash as “effervescent,” “blistering,” and “incoherent.” At its centre is the infectiously appealing, instantly recognisable ‘Cannonball’. Propelled in part by the video directed by Kim Gordon and Spike Jonze, the song was voted Single of the Year by the NME. After more than two years of touring, they played their last show on September 5th, 1994, at Lollapalooza in Los Angeles.
17 years, 8 months, and 30 days later, Jim and Josephine got a text from Kim: “Should we get together to play Last Splash for its twentieth anniversary?” They met up in November to start rehearsals.
In June 2013, they will perform the album live at ATP, Camber Sands, UK, curated by Deerhunter. Tickets are available now from here. More dates are to follow.
In April 2013, 4AD will release LSXX, a Deluxe Anniversary Edition of Last Splash.