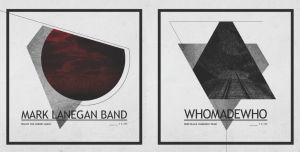 Danish trio WhoMadeWho and Mark Lanegan have covered each other’s songs for release on a limited edition red 7″ vinyl with all of the proceeds going to Amnesty International. The 1,111 hand numbered copies of the vinyl are available for purchase now at www.wmwlanegan.com, and after December 31st both tracks will also be available digitally. WhoMadeWho has offered a reworking of Mark Lanegan’s “Deep Black Vanishing Train,” while Lanegan adds a cover of WhoMadeWho’s “Below the Cherry Moon,” from the band’s 2012 album Brighter.
The hand numbered vinyl will be shipped in a custom made envelope that will stress that one should not open the package and spin the record before Christmas Day. The collaborating musicians decided that in the spirit of giving, all the money from the proceeds of the release should be donated to support the work of Amnesty International.