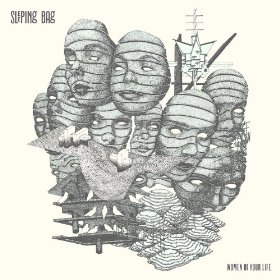 Fire Note Says:  Sleeping Bag’s sophomore record is another great slice of well-done slacker rock!
Album Review:  I am a big sucker for slacker rock and Bloomington, Indiana band Sleeping Bag nail it. Their self-titled debut was just out last year in August and ended up at #29 on our Top 50 albums of the year, so I had high expectations for the follow up. I will admit that I was somewhat concerned about the timing and a potential sophomore slump as Women Of Your Life has hit the streets just 15 months later.
Well, right from the opening self-titled track my worries were put to rest as a starting drum beat and joining repetitive guitar riff get you ready for Sleeping Bag’s slick style of indie rock. This groove is led by Dave Segedy, who is the group’s drummer, songwriter and primary vocalist as his laid back delivery style is engaging and perfectly blended into each of the tracks here.  “Soccer Ball” is a great example of this Pavement likeness rock as the song’s tempo never rises above a consistent foot tap but has all of the intensity packed into the band’s “woo hoos” that close out the song. Like their debut, Women Of Your Life still wraps up in just under 30 minutes but the closing song “Walk Home”, at over 4 minutes, is the band’s longest song to date which gives them an entire new musical playground that is a home run. The layered lyrics, catchy melody, whistling, and in and out jangly guitar work not only create a solid ending to the album but represents one of the best tracks Sleeping Bag have penned to date.

With Women Of Your Life you can hear that in a short amount of time the trio have matured in their overall presentation of lyrics, musicianship and songwriting.  I still really like the spontaneity feel of the debut but Women Of Your Life has the same sort of staying power after repeat spins. This is exactly what you want from a band like Sleeping Bag because a good indie rock record goes a very long way in rotation and Women Of Your Life is precisely that type of album!
Key Tracks: “Women Of Your Life”, “Saturday Night”, “Walk Home”
Artists With Similar Fire: Pavement / Vampire Weekend / The Inbreds
Sleeping Bag Website
Sleeping Bag Facebook
Joyful Noise Recordings
-Reviewed by Christopher Anthony

The Babies: Our House On The Hill [Album Review]