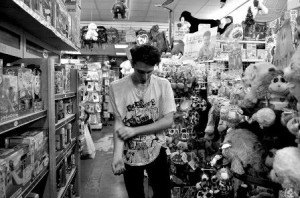 Beach Fossils began in 2009 as the solo project of Dustin Payseur. Before and after the 2010 release of the S/T debut LP and 2011’s What A Pleasure EP, they performed around the world with a lineup that once featured Cole Smith (DIIV) and John Peńa (Heavenly Beat). They quickly became known for their highly energetic stage show, bringing the recorded work to a volume and tempo that would make even the indie-est of crowds wind up in a frenzy. With the exception of drummer Tommy Gardner, that lineup dissolved to pursue their ambitions with the aforementioned projects. Wanting to bridge the gap between the live and recorded aspects of the band, Dustin began writing Clash the Truth determined to capture the urgency, human flow and spontaneity of the live performance.

Now with a full time drummer (and co-writer of two tracks on the LP) Beach Fossils entered the studio in the fall of 2012 with producer Ben Greenberg of The Men. Instead of merely going from a “bedroom DiY” project to a “better fidelity studio project” the deliberate decision to work with Ben was determined to capture, if not in style, the spirit and enthusiasm of punk and aggressive music in general. To ensure that dynamic, the drums were recorded live in a room with Dustin on bass to give the album a driving and energetic force. Consider the titles “Generational Synthetic,” “Caustic Cross” and “Burn You Down,” it’s easy to see how the record, while not a punk or post-punk record by strict definition, certainly nods to the first major influence of Dustin’s creative spark. The first two notes of the title track that kick the LP off are a clear indicator of where his head was at.
The LP also sees Dustin stretching his songwriting muscles, with the acoustic Lennon-esque “Sleep Apnea” and the dreamy “In Vertigo”, which features the vocals of Kazu Makino (Blonde Redhead). During the recording period, the studio was flooded and destroyed by hurricane Sandy and the band had to relocate to another studio to finish the LP in earnest. It all came together when the work of legendary video artist Peter Campus was finalized to be featured throughout the release and on the striking cover. Clash the Truth marks a clear progression in the ongoing story of Beach Fossils. Drawing from the previous works’ melodic strengths and uncanny guitar textures emboldened by a sound closer to their energetic and cathartic live set, it’s the clear next step in the trajectory of the band and the dis-association from the home-recording boom from which it originated. 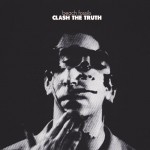