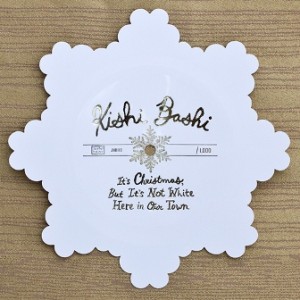 How about a Holiday vinyl? Just in time for the season is the first of an annual tradition at Joyful Noise Recordings called the “SnowFlexi”! This edition features an original Christmas song from  Kishi Bashi, “It’s Christmas, But It’s Not White Here In Our Town”.  You may not know Kishi Bashi but probably have already heard his tune “Bright Whites” which is featured in the new Windows 8 commercial.

This release is limited to 1000 hand-numbered copies on white snowflake-shaped Flexi Discs. The “SnowFlexi” is playable on any standard turntable, and includes an instant MP3 download.
This is a “Pay What You Want” release, and all proceeds benefit Ear Candy Music Charity. Ear Candy will use the funds to supply underfunded music education programs with refurbished musical instruments.
ORDER HERE
Donations of any level are accepted, but below are some general guidelines from Joyful Noise: