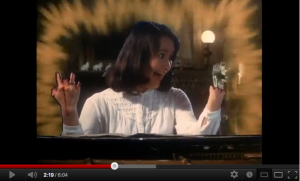 LA-based psych-rockers Electric Flower Group are already mind-blowing on record, but for their new video “The Electrician,” they’ve synched the music with the gonzo 1977 Japanese cult horror film House. EFG’s dark, sonically overdriven take on the Walker Brothers’ classic “The Electrician,” combined with House‘s lush and insanely bizarre visuals, culminates in an aural and sensory freakout, both of which were personally approved by Scott Walker himself. EFG, comprised of guitarist Imaad Wasif and drummer Josh Garza (Secret Machines) have two EPs under the EFG moniker.

Along with brief stints in the Yeah Yeah Yeahs and Lou Barlow’s Folk Implosion, Wasif has released three solo albums. He also collaborated and wrote songs with Karen O for the Where the Wild Things Are soundtrack. In 2012, EFG were handpicked for opening dates with Dinosaur Jr.
Do yourself a favor and check out the band and video that will soon have everyone talking.
“The Electrician” at Soundcloud.

Jason Isbell And The 400 Unit: Live In Alabama [Album Review]