Guided By Voices: The Bears For Lunch [Album Review]

Fire Note Says: Third album released in 2012 from Guided By Voices makes for a perfect bookend.
Album Review: The Bears For Lunch completes the trilogy of albums released this year from the classic lineup of Guided By Voices. It also now gives a final anchor to the group’s new material this year and a temporary bookend to see how all of this output fits together. With January’s Let’s Go Eat The Factory the record rode a 15 year wave of anticipation and came out of the gate strong with power in “Laundry And Lasers”, short memorable tracks like “Hang Mr. Kite” and of course a welcome back for Tobin Sprout’s song contributions. June launched Class Clown Spots A UFO to the world with what I consider the big singles record. The perfected version of the title track still is one of the strongest “radio” type tracks Pollard has written while “Keep It In Motion” featured layered vocal perfection as the entire album had a bigger rock vibe jumping out.
Now comes The Bears For Lunch and it should not surprise anyone to know that it is a different indie monster. It is the perfect continuing story to an already stellar year as it feels, sounds, breathes and pulses closer than the two previous albums to what is considered the golden era of Guided By Voices. This by no means is a move backward but indeed a progression into the bands new comfortable surroundings. This connection equates into some really stellar moments and songs on The Bears For Lunch.

The singles here are not as glossy as the previous albums but just as entertaining. The thundering drum roll that backs “Hangover Child” keeps the song plotting along as it builds its intensity and highlights Pollard’s layered vocal conclusion while “White Flag” is another 2 minute mid-tempo pop masterpiece as the line “white flag in my pocket” will just keep repeating in your head well after the songs conclusion. The most surprising of the three identified singles is the album closer “Everywhere Is Miles From Everywhere” which is not only one of the bigger sounding tracks on the album but it has a much more early 2000 GBV vibe going on. It is a real interesting positive twist to close out the record and will leave fans highly anticipating their next full length.
I really like the singles here but the winning formula for The Bears For Lunch is generated from several other places. The first being the Tobin Sprout penned tracks that represents his strongest offerings to date. “Waving At Airplanes” is not only catchy and memorable with its soaring chorus but an album highlight that sounds great every time you spin it. “The Corners Are Glowing” and “Skin To Skin Combat” hit a superb mid-tempo pace while the acoustic “Waking Up The Stars” puts Sprout’s voice out front and center which shows a renewed vocal strength that works well in the mix. The second key to The Bears For Lunch success is how the little pieces on the record, which initially might seem more like filler, take over your listening experience. This GBV trick works today much like how it did in the past like the one minute “Kicker Of Elves” grabbed you on Bee Thousand [1994] or how “King And Caroline” soared in its 1:36 minute glory on Alien Lanes [1995]. “You Can Fly Anything Right” is one of those type songs as it is a somewhat lo-fi solid acoustic Pollard number that is planted in the second to last track position and is a cut that stands up without trying. “She Lives In An Airport” is another track that pops up out of nowhere with catchy lyrics while the short “Dome Rust” pleasantly struggles to break out of its just over a minute lo-fi restraints. 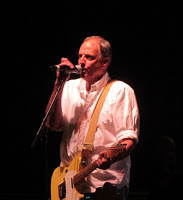 The Bears For Lunch is a perfect conclusion to 2012 for Guided By Voices. It is a record that shines in the right places, has its own unique GBV identity and possesses an excellent replay value. The album is also a testament that the creative magic continues to brew in Dayton, OH and it truly increases the excitement for what comes next in 2013!
Key Tracks: “White Flag”, “Hangover Child”, “Waving At Airplanes”
Artists With Similar Fire: Dignan Porch / The Replacements / Cleaners From Venus
Guided By Voices Website
Guided By Voices Facebook
Guided By Voices Inc.
-Reviewed by Christopher Anthony