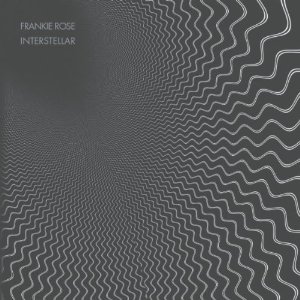 Fire Note Says: Frankie Rose makes her best album yet!
Album Review: Frankie Rose already has a superb indie resume as a member of the Vivian Girls, Dum Dum Girls, and Crystal Stilts plus an excellent solo debut released in 2010. It is a track record that has lead up to this point where she now emerges with one of the best records in her career under her own name.
Interstellar is a tight and sweeping musical progression that leaves all of Rose’s lo-fi, girl group and reverb history behind and sets her on a new course of modern flare that rekindles an 80’s type vibe as the undertone of synthesizers blur in and out of the song structures. The self-titled track starts the record off with a very ethereal almost new age instrumental segment until Rose’s siren vocals take over and steer you into an explosion of vocal harmonies and a drum beat that takes the track to a surprising and entertaining new level.

This same peppy vocal approach takes place on the following track “Know Me” that will have your feet tapping along with the punching drum beat. Interstellar follows this pattern to some degree but stays fresh as Rose can move tempos up and down with ease as “Pair Of Wings” keeps the mood down but has so much going on sonically that it sticks in your head well after its conclusion.
Frankie Rose has truly grown on Interstellar as this record brings forward all of her previous solid projects and experiences. The vibe and sound is completely different here but her sense for dynamic change is the same and pushes each track to the next level. At just a little over 30 minutes Interstellar moves by quickly, spikes different moods and sucks you into its swirling and warm song depths. It is a record that you may initially dismiss but after the opening track you will be hooked and then keep going back to as Frankie Rose is a true talent that only sounds like she is getting started here and I can’t wait to see where she goes from this excellent outing!
Key Tracks: “Interstellar”, “Pair Of Wings”, “Night Swim”
Artists With Similar Fire: Blouse / Laurie Anderson / New Order
Frankie Rose Website
Frankie Rose Facebook
Slumberland Records
-Reviewed by Christopher Anthony