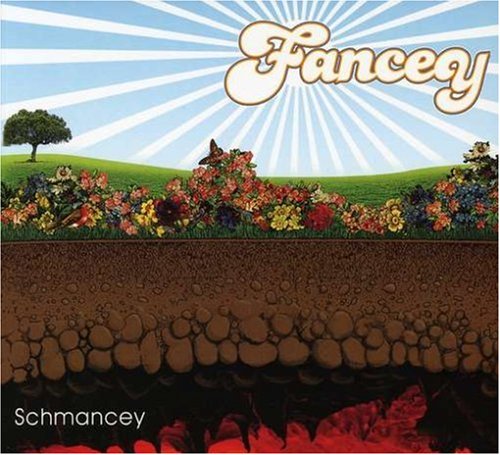 Fancey
Schmancey
What Are Records? [2007]

Fire Note Says: A full scale 70’s pop assault!
Album Review: Todd Fancey is best known as a guitarist in The New Pornographers alongside his buddies Case, Newman, and Bejar. Schmancey is Todd’s sophomore release under his Fancey moniker and it follows in the footsteps of his 2004 self-titled debut by fully reaffirming his lovefest with blissful 70’s pop.
From the opener to the closer you would swear that the radio has been dialed back and I am pretty sure that on “Heaven’s Way” the Gibb brothers are in the backing vocals. Even the track listing on the CD is split into a Side A and Side B with the perfect record turning song and Sloan like rocker “Karma’s Out To Get Me”, which is a great reminder of the way music used to be organized and how that piece of art has been long lost in the digital age.
Whether you call Fancey a side project or the priority gig for Todd it has elements that reflect his time spent with the Pornographers which will just widen Schmancey’s fan base. For everyone else, you will be stunned how these songs just grow on you with each listen and while their vibe is a throwback to the 70’s, Fancey feels fresh, current and just right for today!
Key Tracks: “Witches Night” / “Lost In Twilight” / “Karma’s Out To Get Me”
Artists With Similar Fire: Peter Bjorn And John / Bee Gees / Sloan
Fancey Website
Fancey Facebook
What Are Records?
– Reviewed by Christopher Anthony

Thao With The Get Down Stay Down: We Brave Bee Stings And All [Album Review]